UNGLACIATED REGION OF THE MIDWEST

After 4 hours of sleep, I again woke up excited.  This was becoming a trend on the Coulee Challenge.  Gosh darn, it felt like Christmas morning, AGAIN.  My 3rd present of the Coulee Challenge came in the shape of two hexagon boxes, beautifully wrapped and ready to be opened. The shape and double presents were different than the single presents I received on both Day 1 and Day 2.  Why was the gift more complex today?  I could not wait to begin to open them as my adventure progressed.  I headed to the conference room to check in that I was going to be heading out from the overnight.  I was greeted by Greg and Marcia Smith and Rorie Anderson as I checked out. 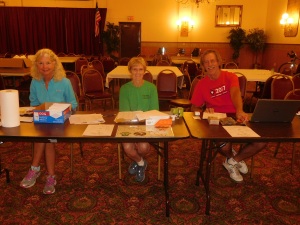 OVERVIEW OF THE DAY:  On the Grand Randonnee menu today was 197 miles with 8,571 feet of climbing (43 feet/mile) from Reedsburg, Wisconsin to Winona, Minnesota.  Greg Smith, Regional Brevet Administrator of the Driftless Randonneurs characterized this day as “equally spaced challenging climbs from start to finish with ample recovery miles in between.”  Each segment between controls had between 43-61 feet per mile of climbing.  Greg told us to “gauge your effort because the climbing does not end until you’re in bed.” 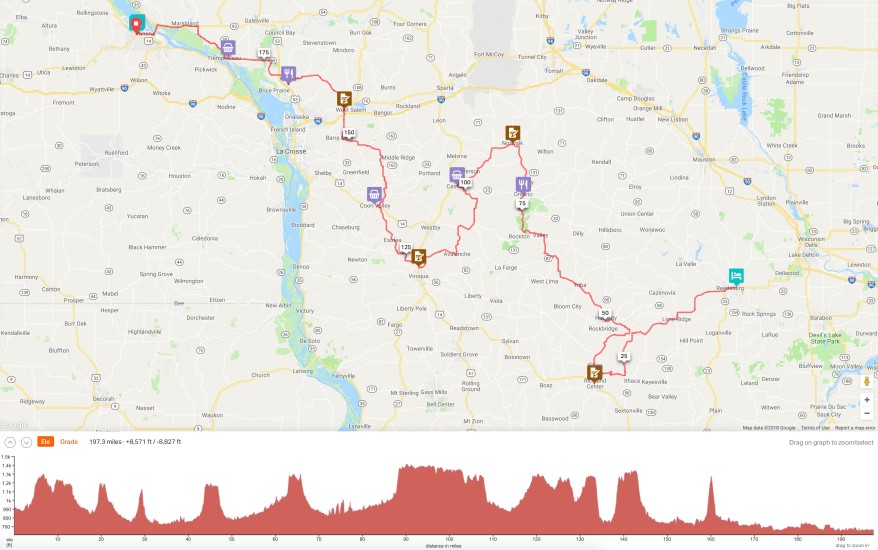 After bidding farewell to Greg, Marcia and Rory, I walked outside with my bike.  Jim Solanick (RUSA #41), Central Florida Randonneurs, was walking out at the same time.  At 4:50 am, I began to open up the first present.  As soon as we turned out of the parking lot, we began to climb.

I felt good this morning as I started out towards the first control in Richland Center. Again, like yesterday morning, the mist covered the valleys.  This was the second time I would be sharing the road with Jim (Central Florida Randonneurs).  We talked about his experiences randonneuring, finishing Paris-Brest-Paris x 2 and Boston-Montreal-Boston x 4.  Additionally, after the Coulee Challenge, I also find out he qualified for Race Across America (RAAM) in 2002. 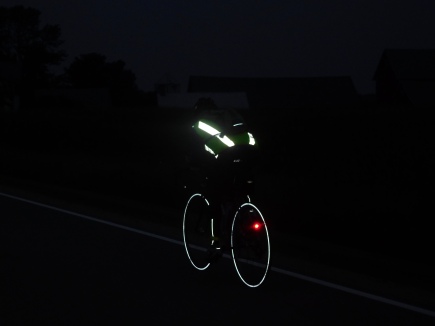 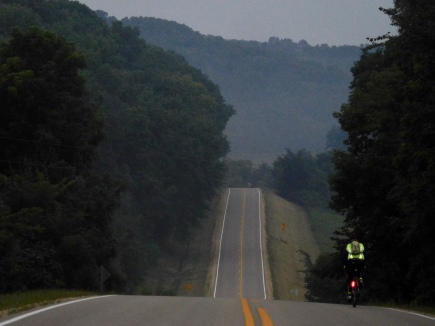 Serenity in the Coulees 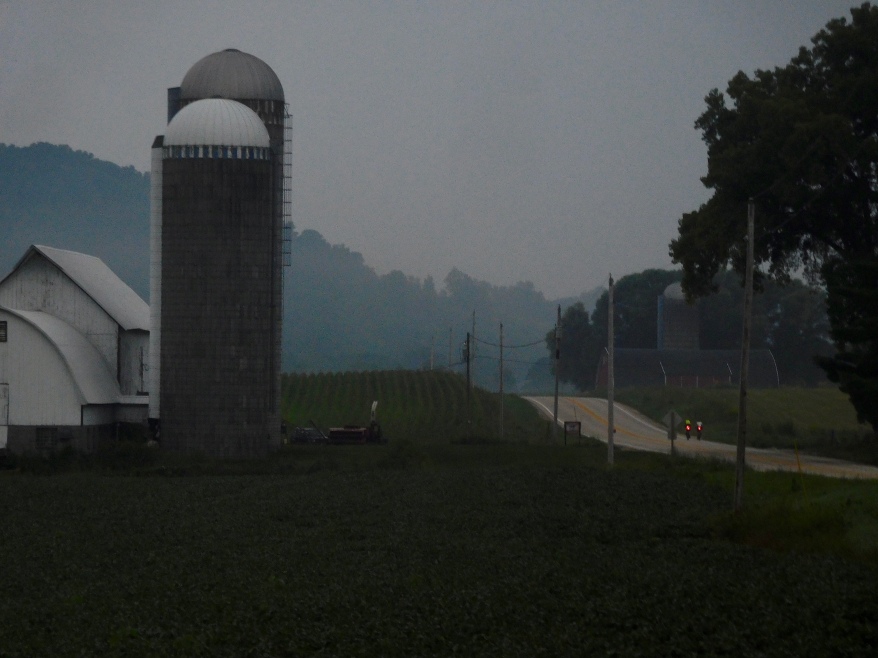 The Serenity of the Driftless

About an hour out of the overnight, we were passed by Lane Coddington from Missoula, Montana on his recumbent.  He asked Jim and I about a positive word for the day.  You can see my response here at 5:56 on this video:

Today’s route was characterized by quiet roads, stretches along river valleys (Pine and Kickapoo River) as well as some challenging climbs up to the ridge tops.  We rode through more of the Driftless region into the Ocooch Mountains with more breathtaking scenery.  As we reached the Richland Center control, we passed by the famous Frank Lloyd Wright Taliesin, a National Historic Landmark.  Richland Center is best known as the birthplace of Frank Llyod Wright.

The route was serene.  It was peaceful.  It gave you time to reflect among the beauty.  There were so many priceless natural and man made gems of the Coulee Challenge 1200k Grand Randonnee:  scenic high ridges, low valleys, natural rock formations, trout streams (Class I and II), wooded areas, dairy and Amish farms.  The rivers and streams provided the perfect habitat to visualize birds and bald eagles as you moved along the quaint winding roads. 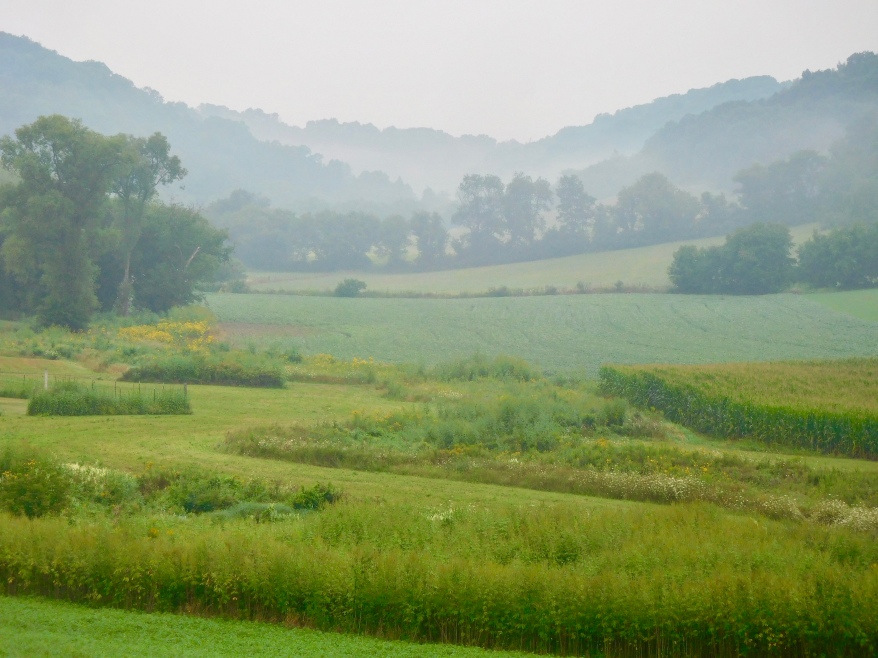 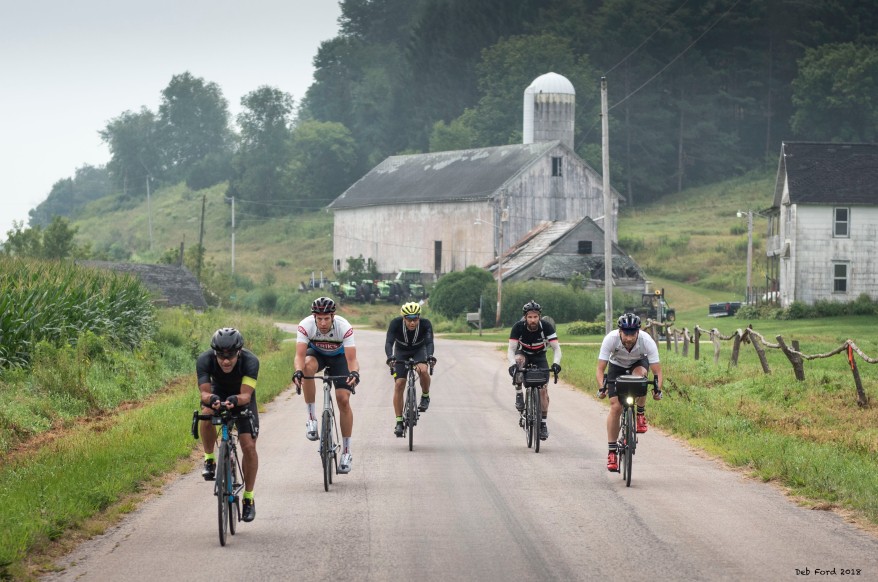 Enveloped by Serenity in the Driftless

I bet you are wondering what it felt like?  Well, have a look and feel the Coulee…

As we continued to ride through the day, the route meandered by the Kickapoo River Reserve, Wildcat Mountain State Park and Coon Valley.  As the afternoon approached, Jim and I parted ways and I rode for alone for a few hours.  The solitude was nice.  This was my favorite day of riding as the scenery was just spectacular with every pedal stroke.  I continued to open up my present…

And, as promised, the midwest hill fest continued with more climbing.  As Greg said, we wouldn’t stop climbing until we hit out beds at the overnight.  We still had a long way to go. 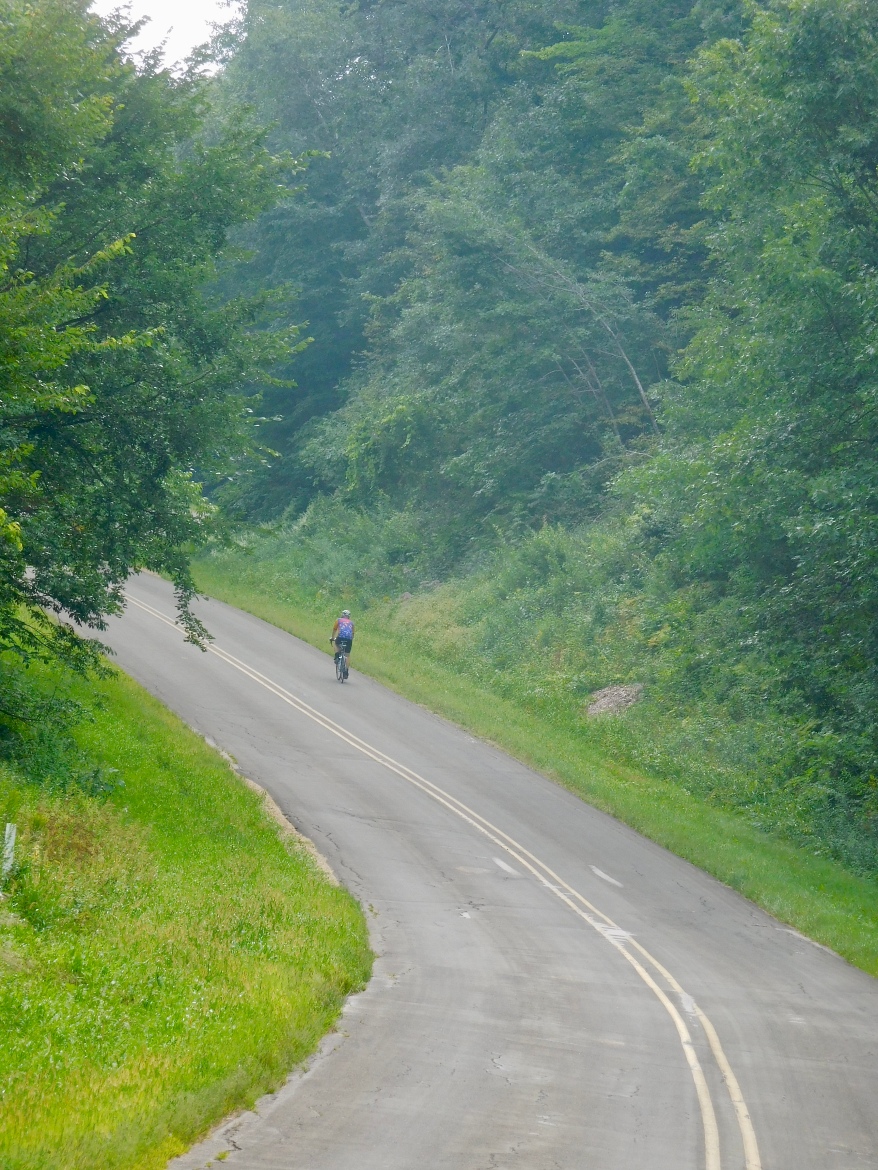 Cranking up a Coulee 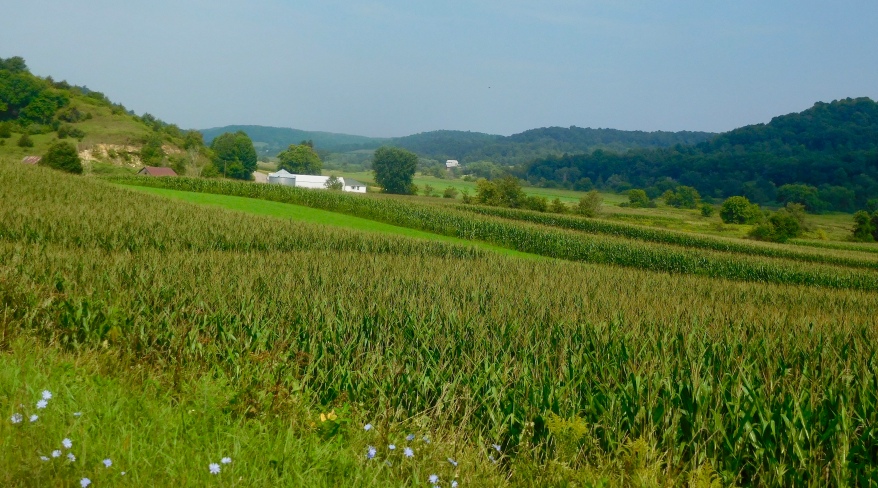 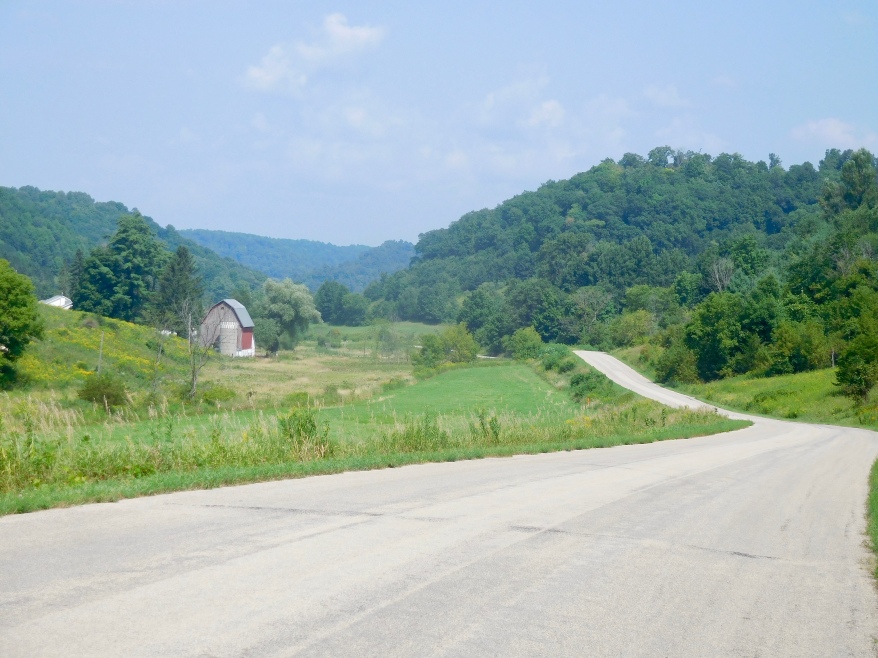 As was the case on the previous two days, my efforts in climbing were rewarded with stunning views of the surrounding hills and valleys.  This day also featured a number of Amish farms on the route. 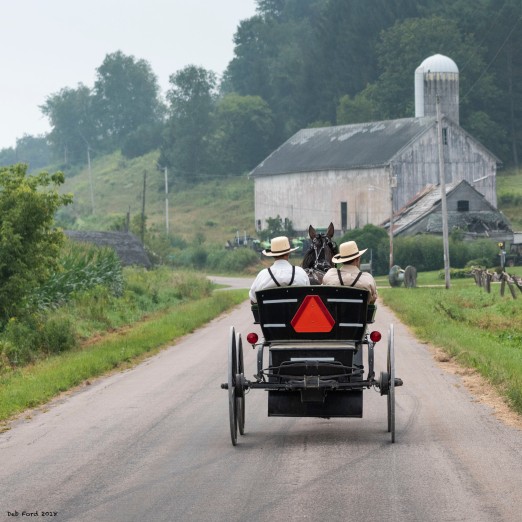 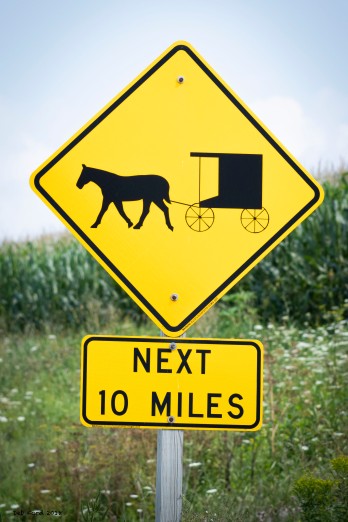 As the day passed into the early afternoon, I found Kit and Scott again on the route.  I also came upon Robert Kingsley from Minnesota.  We all shared the road together again, leap frogging each other as we moved forward.  At about mile 78 (493 miles from the start), I felt the need to fuel with some real food.  I stopped in Ontario and saw Don and Ken Ward leaving a restaurant.  They commented that the soup was very tasty.  That sounded good to me, just what I needed to refuel.  I stopped at The Milk Jug Café in Ontario for some bean soup. and invited Bob to join me.  We enjoyed our Coulee fellowship in this small rural cafe. 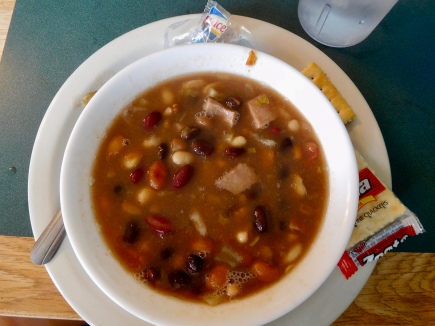 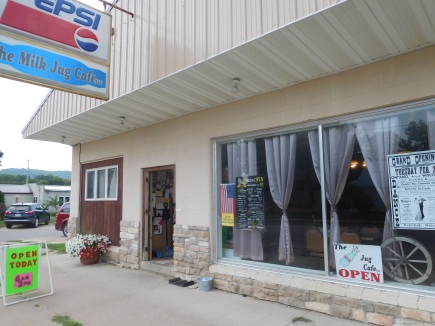 After about 30 minutes off the bike, we left towards Norwalk.  The next control was at mile 86.  I was feeling strong and confident in my riding.  I was keeping my off-bike time down as much as I could.  I recognized I was not efficient as the previous two days.  Fatique was setting in.  But overall, I was happy with my riding on this day so far.  I had no hallucinations and no problems with my neck as I did back at Paris-Brest-Paris 2015.  The score was looking very good: 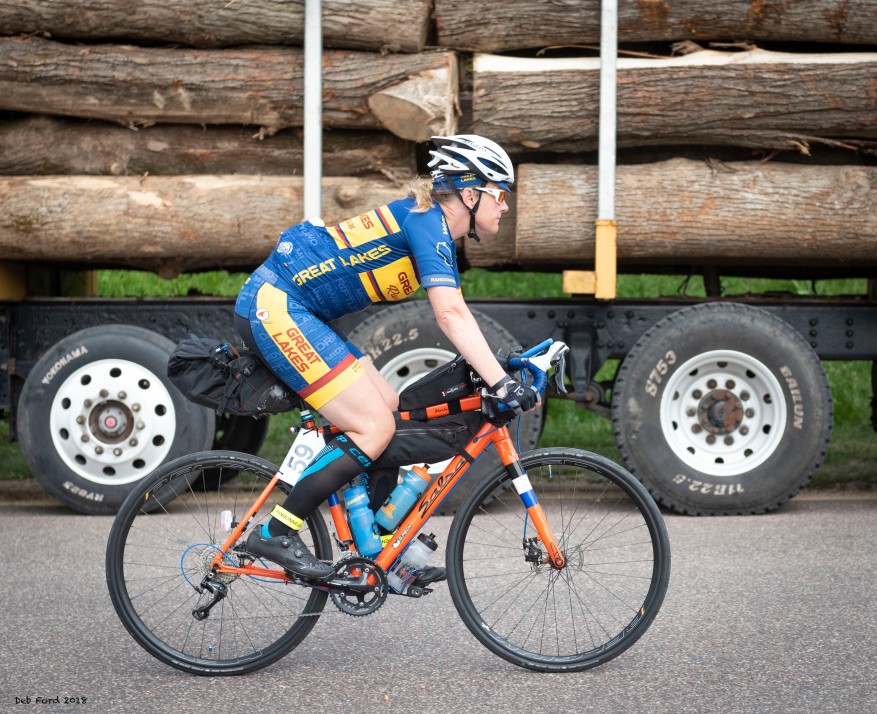 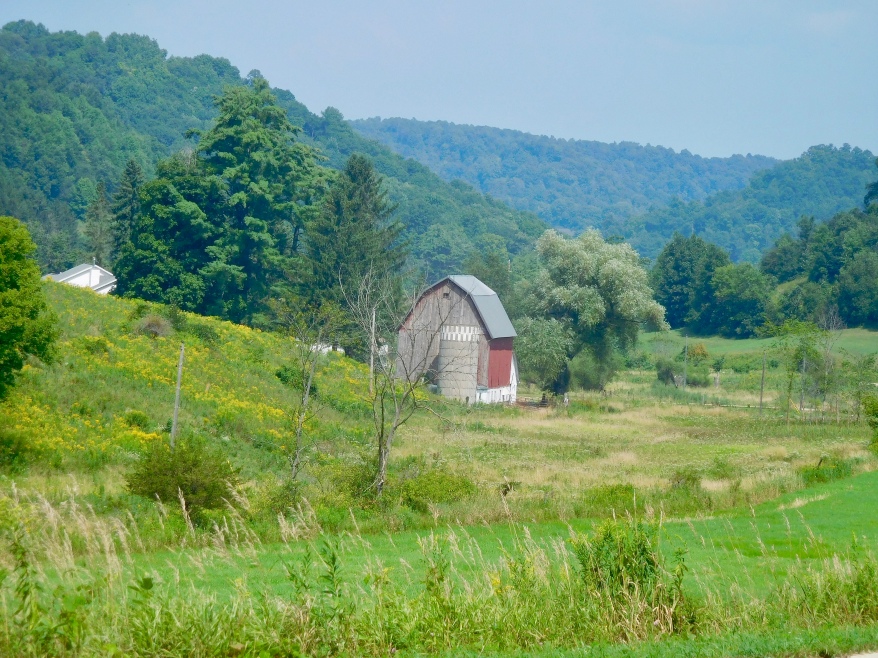 Additionally, I was not having any gear or bike issues on this day.  Although I did not have my Garmin bike computer (since it failed me on the beginning of Day 2), using the Ride With GPS application on my phone was working fine with the audio cues for navigation.  My Salsa Warbird (aka Orange Crush) was also holding up well.

I continued to move along the route, enjoying the scenery and serenity.  I continued to open the first present.  I was so happy and joyful.

In between the controls in Norwalk and Viroqua, I recall seeing this Blessing Box along the road.  I stopped to take it in as I was feeling very thankful for the opportunity to be on this Grand Randonnee.  I was feeling blessed for having no physical or bike issues.  Little did I know how significant this photo would be by the end of the ride today.  If only I knew how significant.  As the sign said at the bottom of the Blessing Box, “But most of all, Be Blessed.”  It is so very true. 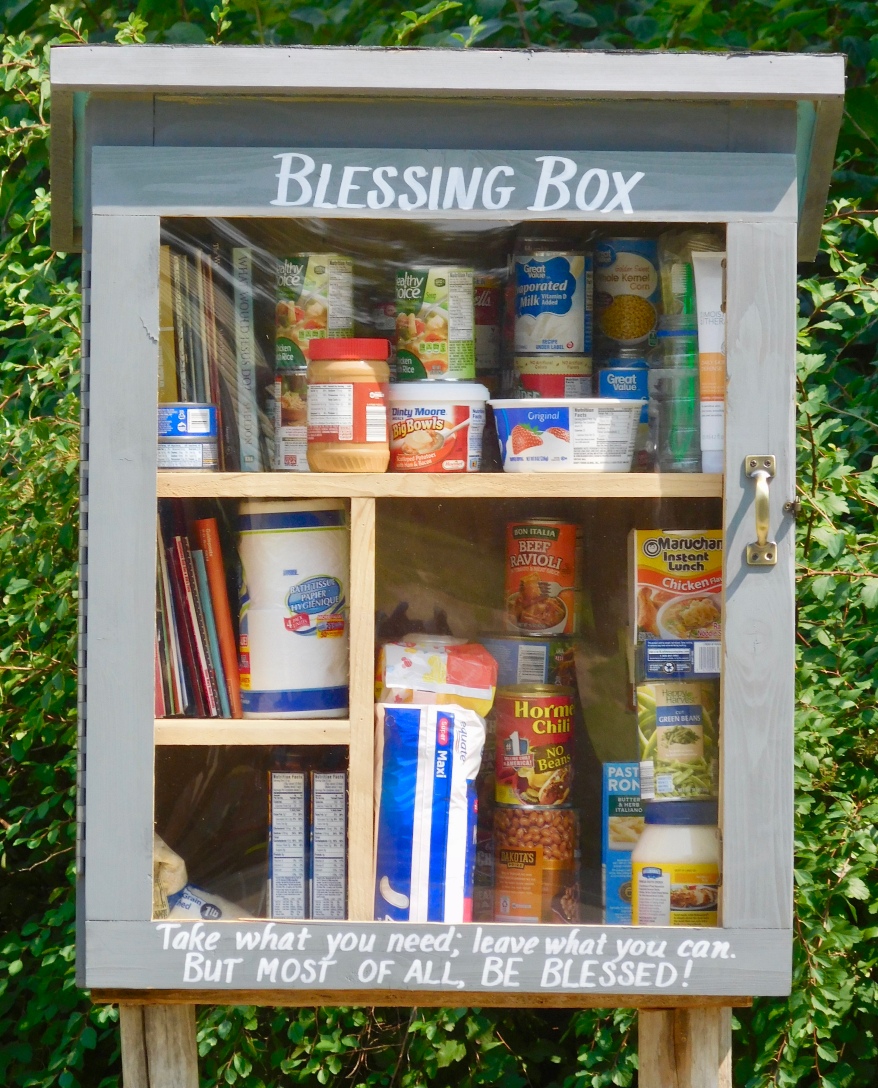 After the Viroqua control, we moved along the course up onto a ridge.  And with this transition, a nice breeze accompanied us.  We continued to move towards the fourth control in West Salem at mile 155. 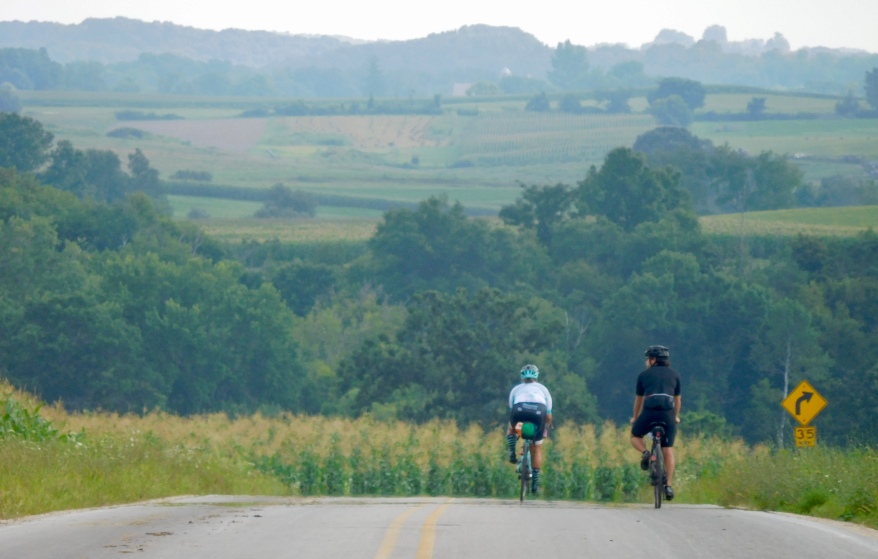 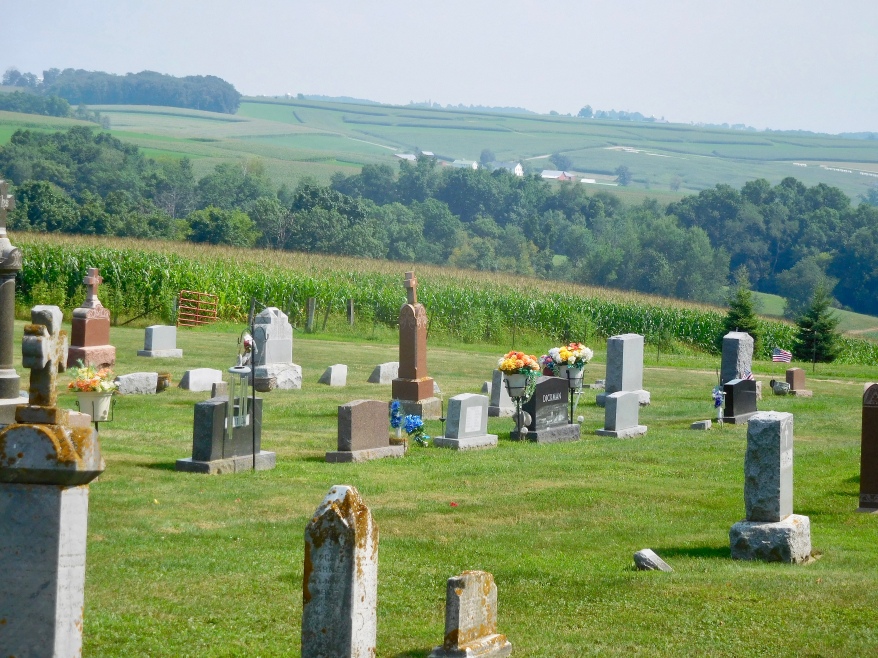 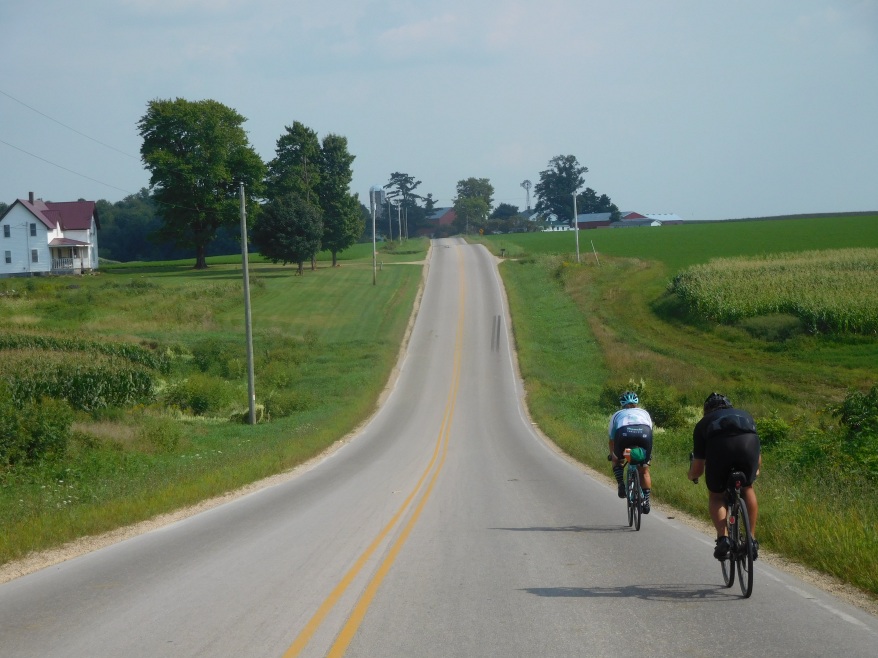 The hours progressed.  The sun continued to move towards the horizon.  We were approaching sundown and the West Salem control at mile 155.  All four of us rode together as we recognized this fact.  There is safety in numbers riding at night.  This is one of the unwritten rules of randonneuring.  As fate had it, our safety would be put to the test in a short matter of time. 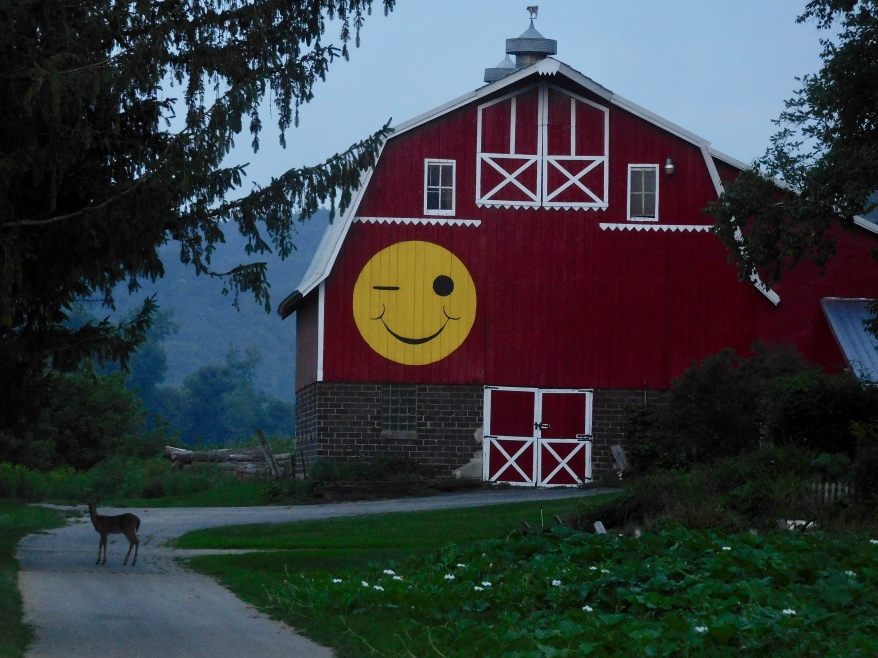 I opened one of the hexagon boxes

to reveal a beautiful sunset as we crested a hill. 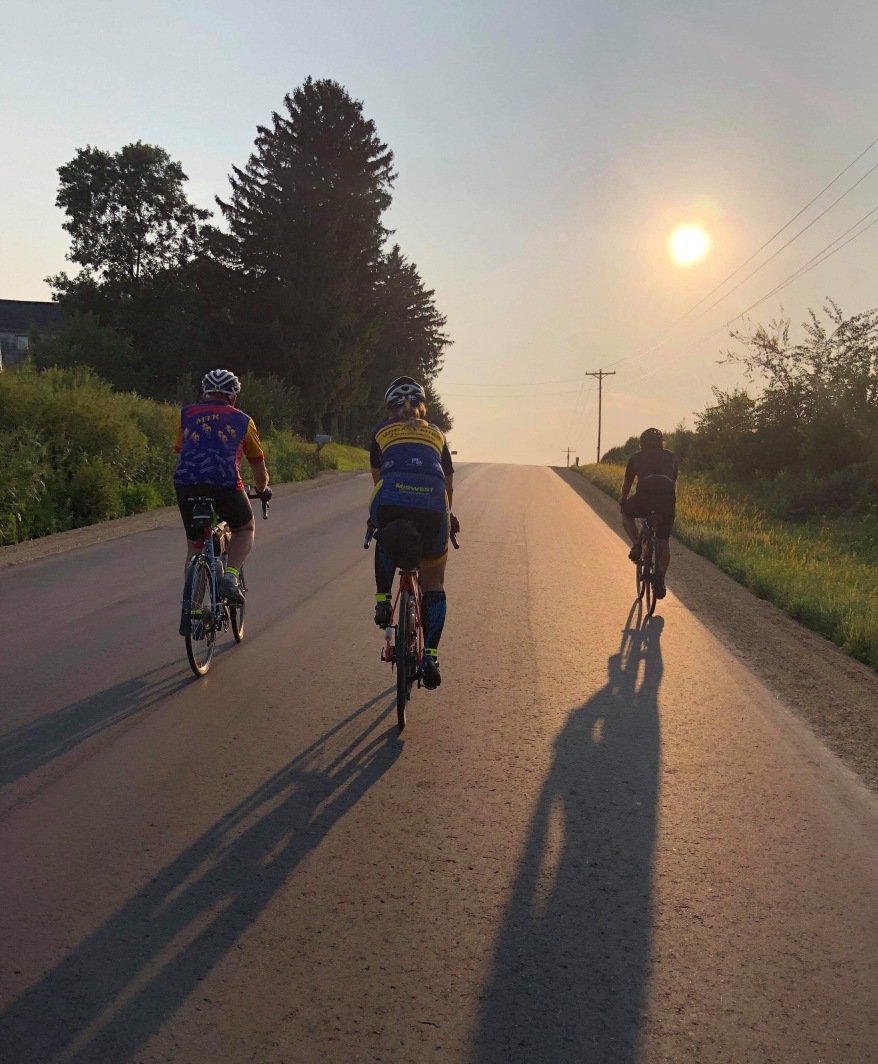 WEST SALEM CONTROL:  We arrived at the 4th control (mile 155/571 total miles) at around 9:15 pm.  After this control, we had one more control in Holmen before the overnight.  I refueled quickly.  From this point, we had 41 miles to Winona to our overnight.  I was getting tired and was looking forward to getting some sleep.  In total, I had 8 hours of sleep since starting on Monday.  My goal was to get 5 hours of sleep on this last night.

We left the Kwik Trip at about 9:40 pm and headed north onto Co Rd M.  It was a long gradual hill climb.  The road was a 2 lane road with a double yellow center line.  Unfortunately, this road had a very limited shoulder.  We were on this road for seven miles before we turned off.  We all had our standard Randonneurs USA regulation reflective gear on (reflective vest and ankle bands) as well as front and rear lights. The order of our pace line was Scott, me, Bob and Kit.  We were visible.

We headed in a single file, moving slow and steady on Co Rd M.  We were visible.

We continued to move up the hill in a comfortable pace to stay together to be noticed and more visible.  With the double yellow line in the middle, cars behind us had to wait to pass.  The posted speed limit was 55 mph.  We were riding in a single file.  We were visible.

At about 2 miles out of the control, I recall thinking to myself that I wished I did not forget my rear mirror.  It’s funny because this was the first time in the entire event (at mile 573) that I remember wanting to have my mirror.  Truth be told, I felt uneasy on this road.  It was dark and we were on a climb up a two lane road, with almost no shoulder.  I recall thinking to myself that I would be glad to get off this road.

Then all of a sudden, I heard a loud crash behind me.

My heart seemed to stop.

The hair on my neck stood straight up.

Conversation in my head:  “Oh shit.  That sounded REALLY BAD.”

I held my composure and continued to move off the road on the limited shoulder available to stop.  I did not hear Bob behind me.  I stopped my bike.  Scott stopped as well.

All of a sudden, a medium sized car darted in front of Scott and me and stopped abruptly.  The car cut us off.  We were lucky that the car did not hit us.  The driver got out of the car and began screaming and running onto the road.  From what I could tell in the dark, she appeared to be a younger driver.  She was holding her hands on her head, yelling, screaming, crying and frantically running around in a circle. Spot Tracker details:  Blue dot is the West Salem Control.  The Green Circle is where I heard the loud crash.

The battle begins in the next episode…stay tuned.

“A rainbow is a promise, of sunshine after rain, of calm after storms, of joy, peace and love. Live with gratitude, for love which fills your heart, peace which rests within your spirit, and hope which says all things are possible.” -Author unknown
BRAVER THAN THE ELEMENTS VOL 7.
“Dig if you will a picture…”
joy