Dreux: At the last control at Paris-Brest-Paris 2015. Becoming an Ancienne.

From the previous control in Mortagne-au-Perche to Dreux, I had covered 48 miles in the final stretch of Paris-Brest-Paris 2015. These miles were interesting, very slow and extremely challenging.  Hallucinations were common as I accepted the bats traveling along side me at this juncture.  Moreover, I was seeing buildings and skyscrapers popping up in the middle of the road every half mile or so. 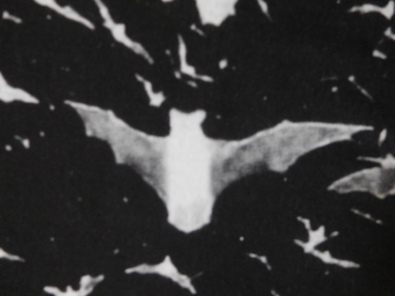 Sleep deprivation, extreme exhaustion, dehydration and caloric depletion had broken down my battered body.  I was right in the middle of the final battle zone.  I had ridden 724.6 miles (1,165K) with over 36,000 feet of elevation gain on 4 hours of sleep with no naps.  Pedal….smile…repeat…

On Wednesday, August 19th at 11:00 pm, I reached the last control in Dreux at mile 724 of Paris-Brest-Paris 2015.  Using the WhatzUp app, I texted the group that I had arrived at the last control.

I slowly moved through the cafeteria and grabbed some food and tried to eat and drink carbonated drinks.  I needed to get more glucose in my system.  Truthfully, I needed to get anything I could in my system.  I found it difficult to eat or take in real food as I had no appetite.  I purchased a sandwich and ate half of it by literally shoving it down.  I then texted Eric, our group leader, the following at 11:18 pm”  “I am in cafeteria, last control. I have ½ sandwiche for you.  I am delirious, hallucinating.  Eating.”  I waited for Eric and Rob to arrive, needing to see my friends desperately at that point to ensure I wasn’t losing my mind and to talk about the hallucinations I had been having for the past several hours.

I sat near the door so I could keep an eye out for Eric and Rob.  About 30 minutes passed when in walked Greg Silver , a fellow randonneur from the Great Lakes Randonneurs.  I was so happy to see someone I knew and called him over.  I knew I was in an altered state and needed some assurance.  I was scared.  He came over to sit by me and I exclaimed, “Greg, I am hallucinating and seeing bats and buildings come up from the road.”  He smiled and said to me, “Oh, it’s just the shadow people.  Don’t worry about that!  I see them too when I don’t sleep enough on these rides.”  He explained that it is normal to experience hallucinations when you are completely sleep deprived.  He asked me how many naps I had taken up to that point and I remarked, “None.”  He said, “Oh Dawn! You need to take short naps and rest throughout the entire event!”  He then recommended that I take a nap before finishing the last 39.4 miles.

Would I nap and fall asleep for hours?

What if I did not wake up to finish the ride in under 90 hours?

The thought of sleep was so alluring to me. The cots at the control looked so inviting and were calling out to me as I am sure they were to everyone else at the Dreux control.  I truly felt like I was existing in a fog at this point, like a character in Sleeping Beauty.  “A mist. A great mist. It covered the entire kingdom. And everyone in it – the good people and the not so good, the young people and the not-so-young, and even Briar Rose’s mother and father fell asleep. Everyone slept: lords and ladies, teacher and tummlers, dogs and doves, rabbits and rabbitzen and all kinds of citizens. So fast asleep they were, they were not able to wake up for a hundred years.” – Sleeping Beauty

I looked around to see if other people looked like they were in altered states and saw a man getting carried out in an ambulance.  He did not look good.  I was beyond a level of exhaustion I had ever experienced before.  I was completely stripped down to my bare vulnerable self.  I literally felt like I was caught in a vortex of time.  All of the mental and physical fatigue along with the hallucinations and pure exhaustion converged.  Everything appeared fuzzy around the edges and I felt like I was drunk or on some crazy hallucinogenic drug.  Oh boy!

I realized that I had had some time to kill before Eric and Rob would arrive at the control.  In addition to desperately needing sleep, I could hardly hold up my head.  I started looking for a medic to help me as it was obvious that I had developed Shermer’s Neck.  Ouch.  Ouch.  OUCH!  I felt like one of those bobblehead doll with my head bouncing and falling forward without any support.

I put my head on the table and exhaled the largest breath I could muster and started to cry.

The occurrence of Shermer’s Neck is one of the ultra-endurance cyclist’s most feared problems, particularly common in events like Paris-Brest-Paris and RAAM (Race Across America). The onset can be very quick.  Common warning symptoms include tightness and discomfort in the upper trapezius and erector spinae muscles of the cervical spine. This leads, after a variable period of time, to rapidly progressive loss of the ability to extend the neck.  There are no statistically valid scientific studies of the causation or treatment of Shermer’s neck. However, there are a number of theories of the causation of Shermer’s neck including spinal misalignment, to sternocleiodomastiod muscle spasm to weakness of the neck muscles in general to prior neck injuries.  In retrospect, I started experiencing the neck discomfort at around mile 640 on route to Mortagne-au-Perche.  In fact, you can see the effects of the Shermer’s neck starting in this picture taken in the town of Le Tanniere, France.  If you look closely at my head and cervical posture, you can see how my head is tilted to the left and slightly flexed and rotated to the right.

I had never experienced neck injuries previously or, had problems during any of the qualifying rides for Paris-Brest-Paris albeit I had never pushed myself beyond a 600K (372 mile) ride prior to attempting to complete this 1,230K race.  It was the perfect storm that allowed Shermer to pay me an unwelcome visit.

From the Ultra Marathon Cycling Association: “Michael Shermer grudgingly gave his name to this malady during the 1983 RAAM on his approach to Harrier, IL, nearly 2,000 miles into the race. His head felt heavy and the back of his neck was increasingly sore. He described it as, “a quick melt down.” His head dropped, making it impossible for him to look up. Cradling his chin in the palm of one hand with his elbow on the padding of his aerobars, he supported his head well enough to finish the race. Despite excruciating pain during the event, his neck was back to normal within two days.  In the 21 years since Shermer experienced the first reported case of Shermer’s Neck, countless other ultra-cyclists have had the same problem. Shermer’s Neck typically starts between 300 and 1,000 miles into the race. In all cases the onset is sudden. From the time of first pain and weakness, the neck usually gives out within two to three hours. Symptoms always start in the back of the neck. The head feels heavy and the cyclist can’t look up without assistance from a mechanical device. Once a cyclist gets Shermer’s Neck, it is unlikely to leave for the remainder of the race.”

Shermer had paid me a visit and I guess he was going to be my stoker on my imaginary tandem on the ride into Paris.  I found the medics at the control and tried to see if I could obtain a cervical collar to help with my neck pain and lack of strength in my neck muscles to finish the remaining 40 miles of the ride.  Unfortunately, the medics were referring me to the “Phamacia”.  At 2:30 am, this was not going to help me.  I asked if they had any cervical collars or braces I could use.  They didn’t have any.  I then asked for towels or masking tape so I could make my own makeshift cervical collar.  They had nothing which surprised me since they were the paramedics.  At that point I was wishing for anything; a cervical collar, a towel rolled up and placed under my neck, masking tape or a bungee cord to secure my helmet into extension…ANYTHING! 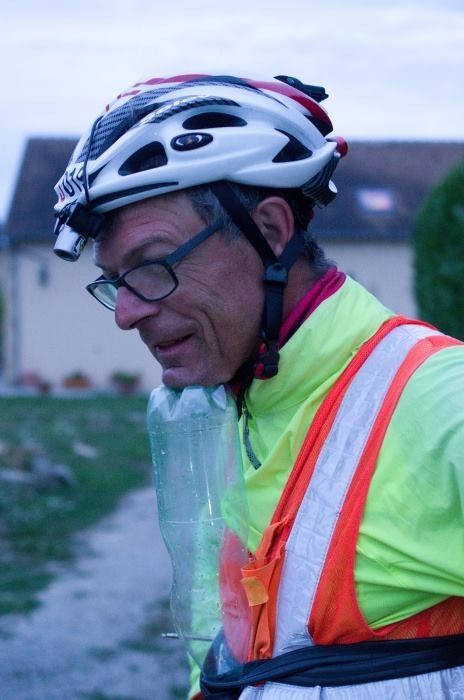 There was nothing available to me.  I realized I was going to have to improvise.  I refused to allow Shermer to stop me from finishing Paris-Brest-Paris.  Not a chance!  Was I scared?  Yes.  My fear would not stop me.  I would face it head on and keep moving forward.  It is what I did with that fear that kept me moving forward.

I tried to sleep as I waited for Eric and Rob. I thought that if I rested a bit, perhaps my neck would feel better when I began the last leg into Paris.  I had banked enough time to finish before my cut off and had a few hours at Dreux before I would have to leave.  I knew I had to try to sleep before getting back on the bike.  It took me some time to relax amidst the noise, chaos and varying degrees of pain and suffering my fellow riders were experiencing.  The control at Dreux looked like a war zone.  People were sprawled out everywhere.  And I mean everywhere!  Rob and Eric arrived after about an hour or so and we all sat and rested for some time before continuing the final leg to the finish.  We were all exhausted.

I felt like I was stripped to my bare self.

I was scared.  Sleep deprivation felt like a form of hell for me like I had never experienced.  In the truest sense, it felt like I had literally turned myself inside out and had degutted myself. 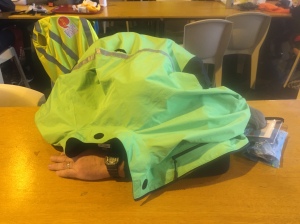 The last 39.4 miles from Dreux to the finish line of Paris-Brest-Paris in Saint-Quentin-en-Yvelines would be the most difficult test of my physical, emotional, spiritual and mental being on a bike I had ever experienced.

The dice had been rolled….

I BELIEVED… but OH BOY… 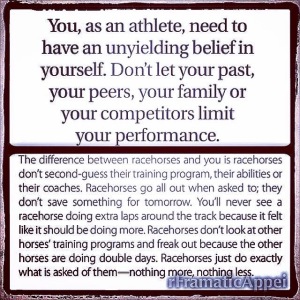 GROW BEYOND YOURSELF. STRETCH TO SIGNIFICANCE.
Thank you to all of the advocates/allies who made today’s Stage 1: 82km Race of @letourfemmes possible, especially Kathryn Bertine with her vision, tireless advocacy and determination. You have been and continue to be on the front line of advocacy and change. We see you. We follow your lead.
The first women's Tour de France (TdF) was in 1955, then again in 1984-1989. Women were banned from the TdF until 2014 when @LeTourEntier secured a race and TdF naming rights for women via @LaCoursebyTDF.
Juneteenth (also known as Freedom Day and Emancipation Day) is the newly minted federal holiday which commemorates the emancipation of enslaved black individuals in the United States and celebrates African American achievements. Dr. Opal Lee, 95 (considered the “grandmother of Juneteenth) whose personal mission was to make Juneteenth a national holiday, remarked yesterday, “If people can be taught to hate, they can be taught to love and it’s up to you to change it.”